Market remains under pressure in July

Vehicle sales performed to the adjusted expectation in July this year, recording an industry total of 32 396 units for the month. 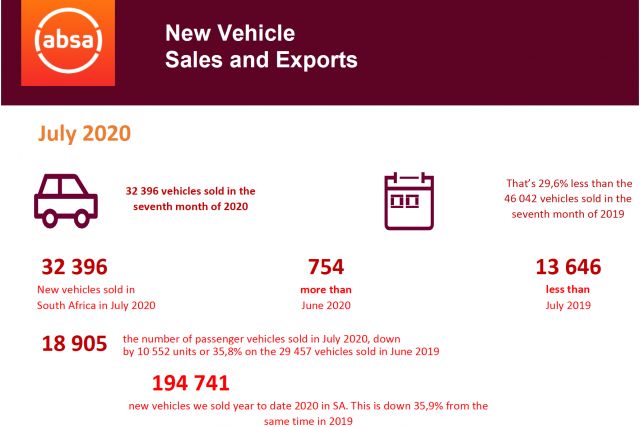 Of the total sales figure, 30 325 units or 93.6% of the vehicles were sold by dealers. This means that fewer than 2 000 units were sold to the government and manufacturers and only 135 units were delivered to vehicle rental buyers. With seven months recorded, the total vehicle market is 38.5% or 108 925 units behind 2019.

The passenger vehicle market appears to be the hardest hit. In July, the industry sold 18 905 passenger vehicles, which is 35.8% lower than for the same period last year. Light commercials dropped by 19.7% to 11 123 units, when compared to the same month last year.

Naamsa notes in its commentary that there are some green shoots. The Absa Purchasing Managers’ Index measured at 52.1 index points, the first time that this is in positive territory since December 2018, which points to some expansion in the economy.

At the same time, the additional 25 basis points cut and low fuel prices have provided some additional relief to motorists and should filter through to new vehicle sales.