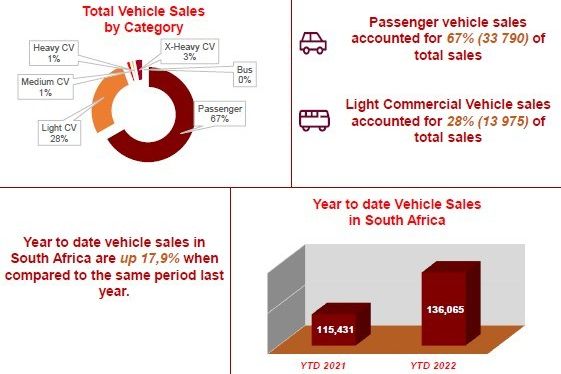 Aggregate domestic new vehicle sales increased by 16.5% year-on-year to 50 607 units in March 2022 from the 43 423 units sold in March 2021 to achieve the highest monthly sales total since the pre-pandemic October 2019 sales total.

An estimated 85.8% or 43 441 units of total reported industry sales of 50 607 vehicles represented dealer sales, with an estimated 8.2% representing sales to the vehicle rental industry, 4.6% sales to government and 1.4% sales to industry corporate fleets.

The naamsa CEO, Mikel Mabasa, says the positive new vehicle market performance during March 2022 could be attributed to pent up demand aligned with the increasing normalisation of business conditions and enticing new model choices in the domestic market.

Mabasa says motorists have welcomed the temporary reduction in the general fuel levy by R1.50 per litre from 6 April to 31 May 2022 to curtail the record fuel prices to some extent, with further relief measures to follow, as announced by Finance Minister Godongwana.

Mabasa says the SA Reserve Bank raised interest rates in November 2021, as well as in January and March 2022, and the upward trend is set to continue over the balance of the year in an effort to subdue inflation.

He says upward pressure on food, fuel and electricity prices will adversely affect all households over the short to medium term, and consumers should brace themselves for ongoing cost of living increases.

Mabasa says the prospects for vehicle exports in 2022 remain optimistic despite the decline in March 2022 because of further new locally manufactured model launches during the year.

The Nedbank Group Economic Unit says the decline in light commercial vehicle sales for the first month this year suggests a shift in consumer demand from bakkies to more affordable passenger vehicles.

However, the unit says the new vehicle sales market is off to a bumper start, supported by pent up domestic demand and the introduction of new model variations, which will boost first quarter GDP.

“Looking ahead, households will find some comfort in the temporary reduction in the general fuel levy and further relief measures that are expected to follow.

“This will contain some of the impacts of what would have been a huge knock-on effect on consumers’ disposable income through higher fuel prices,” it says.

Nedbank warned that many downside risks emanate from elevated global oil, food and utility prices, which will erode consumers' spending power, and the Reserve Bank is expected to continue hiking rates throughout this year and into 2023 following the three consecutive interest rate increases so far.

“On the global front, the Russian-Ukraine war, combined with strict lockdown restrictions in parts of China, will exacerbate supply chain blockages, freight costs and semiconductor shortages.

“Consequently, global growth prospects will be lower than previously anticipated, negatively impacting export volumes to major export markets in Europe. However, some reprieve is expected to stem from the introduction of new models,” it says.