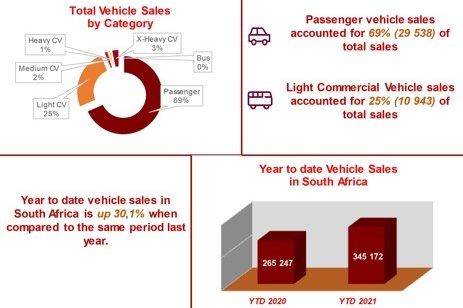 Naamsa CEO, Mikel Mabasa, says the recovery in the new-vehicle market is in line with the country’s return to adjusted level 2 lockdown regulations and overall enhanced business and consumer sentiment.

President Cyril Ramaphosa last week announced that the country would be moving to adjusted level 1 lockdown regulations from midnight on 30 September 2021, which is likely to spur further economic activity.

The country moved to adjusted level 2 lockdown regulations on 12 September 2021.

Mabasa says new-vehicle demand is starting to pick up with consumers, businesses and rental companies returning to the market.

However, Mabasa reckons many COVID-19 disruptive elements remain in play, and prevailing market conditions have been hampered by higher logistics costs and supply chain disruptions, such as the global semiconductor shortages impacting on the availability of certain models.

Mabasa says analysts project that vehicle production losses owing to the computer chips used in modern vehicles could be between 6.3 million and 7.1 million vehicles for 2021 and it is expected that the shortages will spill over to the middle of 2022 before stabilising.

However, Mabasa says it is encouraging that new-vehicle demand seems to outstrip supply at present, and the outlook for the balance of the year looks positive.

Mabasa says dealer sales represented 82.7% of overall total reported industry sales of 43 130 vehicles, with sales to the vehicle rental industry accounting for an estimated 12.4% of total sales, sales to government 2.5% and sales to industry corporate fleets 2.4%.

Naamsa says the car rental industry supported the new passenger car market during the month and accounted for 16.8% of total car sales registered in the month.

Naamsa reckons that as anticipated, the knock-on effects of the economic disruptions caused by the civil unrest in July 2021 and the cyberattack on Transnet operations continued to impact on the industry’s export performance during the month.

Nedbank Group Economic Unit agreed with Naamsa's sentiment that the recovery in vehicles sales continued in September 2021 but stressed that the sales figures were still heavily distorted by base effects.

Nedbank says that after stripping out the base effects, new-vehicle sales are still well below pre-pandemic levels and down 13.4% compared to the three-year pre-COVID average for 2017-2019 September and 12.2% below September 2019 levels.

“The weakness was broad-based, with all classes of vehicles below trend.

“Notably, passenger and light commercials, which together made up roughly 95% of total vehicle sales in September, remain 11% and 19% lower than 2019 levels,” the bank says. 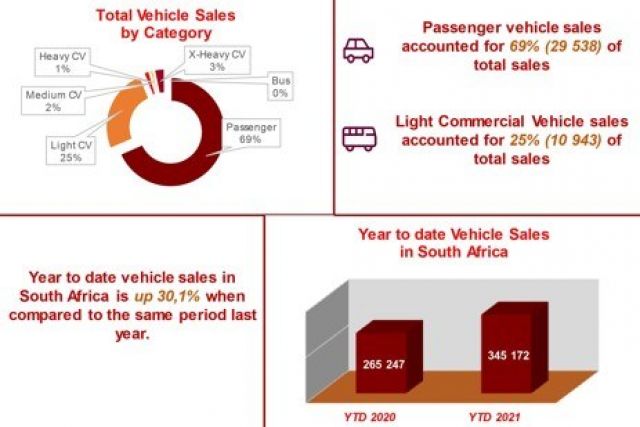