Stanmar Motors celebrates 65 years in business this year, with a world that looks much different from the one when this dealership first opened its doors. 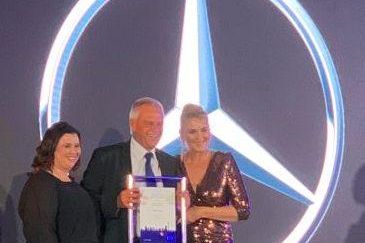 Their sales area covers the entire region between Riversdal and Beaufort West, which means that it includes towns like George, Knysna, Plettenberg Bay and the Tsitsikamma area. This used to be one of the most affluent areas in the country, but a change in demographics, COVID-19 and a general economic decline have forced the dealer to cast its net to customers in an even wider area.

Dealerfloor spoke to Ian Matthews, Dealer Principal (DP) at Stanmar Motors, the Mercedes-Benz Dealership in George since 2010. Ian is also the Group DP of the Mercedes dealerships in Kimberley, Upington in the Northern Cape, New Vaal Vereeniging in Gauteng with its satellite dealer Bethlehem in the Free State since 2019. Stanmar Motors is part of the Hallmark Motor Group.

“The lower sales of new vehicles owing to shortage of stock are currently a worldwide problem for all manufacturers. I am glad to say that our customer relationships have helped us through this dreadful period. So far, our aftersales – the workshop and parts departments - have continued to do well, and our Commercial Division was not that seriously affected with better-than-expected product supply and sales.

“We are fortunate to still be doing well on pre-owned vehicle sales. Currently, we sell a ratio of 4 used vehicles for each new one sold, which is higher than usual. But as soon as some normality on the new side returns, we will move back to a 2:1 ratio,” says Ian.

“Our new product line up remains awesome and with the release of some new models, the demand is high.”

Asked about what models are affected, Ian says it is across all models. He mentions that the major global markets are rebounding and there remains a shortage of some electronic components used in the manufacturing of new vehicles. These factors have all put pressure on new vehicle stock.

“We have 42 model derivatives in our new vehicle line up and await the introduction of the new and popular C-Class in the second or third quarter of this year.”

(Dealerfloor recently reported on the problems being experienced with the availability of microchips -https://dealerfloor.co.za/industry-news/the-chips-are-down).

We asked him about the ongoing swing towards SUVs away from sedans, especially In Mercedes-Benz’s case with its wide variety Sport Utilities and Coupé variants.

“A number of reasons come to mind: People enjoy the higher seating position, not only for a better view, but the ease of getting in and out appeals to customers. The all-round driving experience has also improved over the years. The all-wheel drive further adds to the all-round safer feeling of this kind of vehicle,” says Ian.

Ian sees an uptake in SUVs from the smaller GLA at the entry point in the Mercedes stable to the larger GLS and of course the continued demand for the big G-Class. “In the near future we will see the introduction of Electric Vehicles (EVs) into the local market and it will be a big part of Mercedes-Benz’s business,” Ian tells Dealerfloor.

“We have seen a trend to buy down over the last 10 years, mainly for financial reasons but on the other hand vehicles such as the astonishing G-Class AMG G63 remain extremely popular. Talking about popular, although Mercedes announced the end of production of the X-Class.

bakkie, it was and still is very much in demand in our region,” he says.

As Group DP, Ian is passionate about community involvement. “We are involved with schools, animal shelters and organisations like Cansa. Our emphasis leans more towards education with bursaries and donations of computer equipment,” says Ian.

The Dealership recently celebrated another achievement – one of its general workers in the workshop has been with them for 48 years. Tinus Adams is part and parcel of Stanmar Motors and was assisted by the dealership to obtain his own house. “This is a huge achievement, and we are proud of him,” says Ian.

Ian has been in the motor retail trade for the last 22 years with a stint in the banking sector and his own business for the previous 16 years. He is a keen golfer, spoilt for choice in the George and Knysna regions with world-renowned golf estates like the famous Fancourt.

“Golf enables me to relax, getting rid of stress while at the same time it is a perfect opportunity to do some networking for the business and building relationships with customers. Mixing business and pleasure is a perfect combination,” Ian concludes.