For the second time in the history of Volkswagen’s Grand Prix Awards, the ceremony, which was themed ‘Drive Your Future’, was streamed on a virtual platform owing to COVID-19 safety regulations. 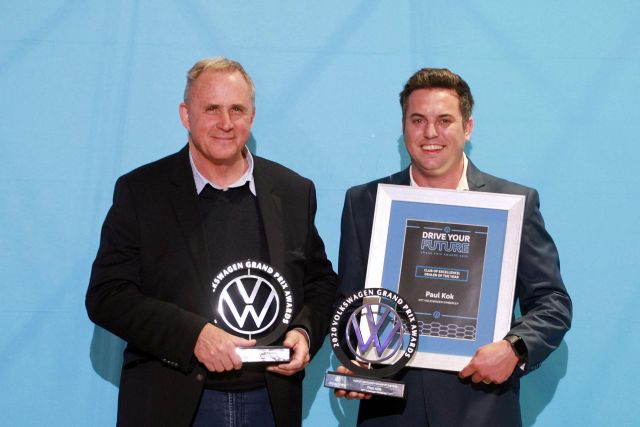 Paul Kok from Volkswagen Kimberley won one of the most sought-after awards of the night, the Dealer of the Year Award. The Dealer of the Year Award is presented to the Volkswagen Dealership that delivers the best overall results across various disciplines of the business, on a consistent basis, whilst representing the Volkswagen brand values at the highest level. Dealerfloor recently had an interview with Paul Kok, Dealer Principal at VW Kimberley, on his management style and broader view of the market.

Paul told Dealerfloor after the awards ceremony that this achievement is a result of a team effort. “This is what happens when everyone puts in100%. Add to that the leadership and investment of the owner of the NTT group, Fred Whelpton, and you have a winning recipe,” says Paul.

Chris Beukes and Brad Kaftel from Hatfield Group won the Macro Group of the Year for the fourth consecutive time. To qualify as a Macro Group, the group needs to contribute at least 8% towards the Volkswagen Dealer Sales result.

Kruger has a long list of remarkable achievements with the Volkswagen Brand. Between 2001 and 2020, he was in the top 10 of the best performing Sales Executives. He was also the top Volkswagen Sales Executive in South Africa six times in a row - from 2009 to 2014.

In that period alone, he also sold 1 954 new Volkswagen vehicles, which is 325 vehicles a year or 27 sales a month. Sadly, Anton Kruger passed on last year and his Lifetime Achievement Award was received by his wife.