‘It’s all about counting blessings’

Vernon Landsberg is a rare breed in the car business. He knows a lot about signage and previously sold boats for ages before turning to Toyota.

Dealerfloor met up with him at the Toyota tent at the recent Sugarbelt 400 in Eston and learnt the surprising secret behind this salesman’s successes.

What is the craziest thing you have done?

In 1994, after school, a mate and I decided to hike around the new, democratic South Africa.

We pooled our funds, R400 in total, and thumbed our first lift from Pietermaritzburg. It took us to Butterworth in the Eastern Cape. After two weeks and several adventures going around South Africa via Cape Town and Kimberley, we met a German who owned a yacht in, of all places, the then Roodepoort airport (what is today Lanseria International Airport).

We hit it off and he told us if we could get passports in short order, he would take us on as deckhands. What a dream, from hiking around South Africa to sailing the world!

So off we rushed to Pretoria to apply for passports, only to learn that government will not be rushed by two wannabe deckhands. The German sailed off without us and we were back on the shoulder of the N3, thumbing lifts.

A driver in a Mini stopped and we piled into the small car. A few clicks down the road, he took out a small glass pipe and lit up. Naïve as I was, I didn’t know it then, but our driver was smoking crack cocaine.

Maybe it was the euphoria or maybe he was a rich drug dealer, but after dropping us halfway, he gave each of us R200 cash. That was good money back in 94! And this is when the universe decided to show us its really weird side.

Would you believe it that the next car to stop for our thumbs was also a Mini. And that the driver was also a crack smoker. And he also gave us R200 each when he dropped us off in Heidelberg. From there we returned to Pietermaritzburg.

We came back home after a 16-day hike around South Africa, with as much money as we had when we started out.

You worked selling boats for many years all over southern Africa. What is your favourite place?

I travelled more with my signage and deck-installing business.

We had a loan company as our main client, and we were installing signage at all their branches nationwide, which took me all over our fantastic country. As a young man, I really enjoyed travelling and spending a few days in every town you see on the weather map.

But my favourite place, that is a tough question. There is a small beach in Kenya I still want to visit. Malawi is very special, once you get past all the donkeys at night… but if I have to choose, I’d go for the entire Wild Coast. I remember one morning, installing a jungle gym at a lodge near Hole in the Wall, where we stopped working to watch a pod of dolphins hunting in the waves. That experience sums up the Wild Coast for me.

Having now sold both boats and cars, is there a difference?

Boats are where family and friends get together.

And most boating clients know exactly what they want. It is also mostly a ‘they’, as the wife is on board, excuse the pun. Mostly, whatever hubby is spending on the boat will be balanced by an equal outlay on the house.

On occasion, it was the wife who did the research to buy the boat as a gift. I have delivered a Tug 20 and a Land Cruiser 100 series station wagon from Pietermaritzburg to East London, both gifts from her to him on Valentine’s Day.

Have you ever raced a boat against a car?

I did. No names or places, but the boat takes off and stops faster, the car only wins on top speed. Oh, and the car did not have the problem of diapers lodging in the prop or having to dodge submerged logs.

You play cricket, both limited overs at the Beaumont Eston Farmers’ Club and action cricket. Is this a good way to build networks?

I don’t play sports, or go to church, or take part in any social activities to network for leads or hustle for sales.

My advice to sales execs is to just be your real self out there. Try that second most important injunction, ‘love your neighbour like yourself’, and you’ll see life will take care of you.

That is profound advice. Is this your philosophy?

I don’t think of myself as being profound. I’m just a regular bloke trying to be a good husband and dad. I do think life defines us by the crazy things we do. I also identify with that fridge magnet, which states: “The more I know people, the more I love my dog.” So for me, few things are braver than living that second injunction ‘love your neighbour like yourself’.

But I have been inspired by Og Mandino’s books, especially ‘You Are The Greatest Miracle, and You Are The Greatest Salesman’; and living up to my potential is the greatest daily challenge I think any of us can take on. It all starts with realising how many blessings we have and counting them daily. You will see, the more blessings you count, the more you get to count. 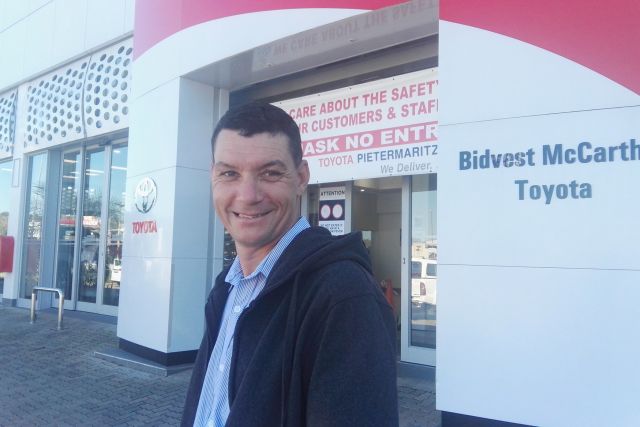