Being awarded the title as Top Sales Executive of the Year for 2021 by Hyundai came as a surprise to Sandra Meyer from Hyundai Centurion at the manufacturer’s recent Dealer Conference.

She says it was unexpected but the cherry on top after a year’s hard work in a market that is still not firing on all cylinders. “I am honoured by this award and although limited stock issues have a negative impact on all motor retailers, we are fortunate that it was less severe for us during last year.

“We have such a variety of model ranges that place us in a good position to assist clients in obtaining a new vehicle. Fleet customers make up a huge part of the business across the spectrum of commercial and passenger vehicles.

“Our fleet customers vary from small businesses to larger ones, buying more vehicles more frequently. It is mainly private businesses as retail companies and government sales are handled by our head office.

“Fleet owners buy anything from our H100 bakkies, our larger 4-ton trucks to the smaller Cargo models in the Atos and Grand i10 ranges. We are eagerly awaiting the arrival of the replacement Staria Panel Van for the outgoing H1, which will in all probability arrive during the course of the year.

“Our Hyundai i20 and Venue models are immensely popular, not only with private buyers but even fleet owners. In general, the uptake on more SUV type of vehicles is strong as worsening road conditions necessitate vehicles with a better ground clearance. Our larger SUVs like the Palisade and Santa Fe are also popular in Centurion because of the number of business owners and senior business executives residing here,” she tells Dealerfloor.

Getting back to the prestigious award, Sandra says that her first job was at a Hyundai dealership back in 2006 and she worked at different dealerships before exiting the motor trade in 2016 for nearly four years to attend to her children and to open a day-care centre.

“As a mom of three kids that time was well spent. In 2020, it was time to get back into the business of selling cars. I must say, I never want to work at any other dealership, as Hyundai Centurion is a flagship dealership where everything is done professionally and is an example of how it should be done.

“Our dealership also won the bronze award for Parts Dealer of the Year from Hyundai at the conference of which we are also very proud. My aim is to be the Top Sales Executive again at the next award ceremony, and I try to meet my sales targets every month,” she says.

And has the woman factor, played a role in her success? “Maybe. Women, in general, have a softer approach in dealing with people and offer a different perspective. It could have assisted me, but the hard work still had to be done, no matter what your gender,” Sandra says.

The dealership also sells Mitsubishi and although the sales staff are separate, they are allowed to cross-sell, including selling used vehicles.

The Dealer Principal at the Motus multi-franchise set-up is Nico Ströh, and Nadia Lubbe is the New Car Manager. 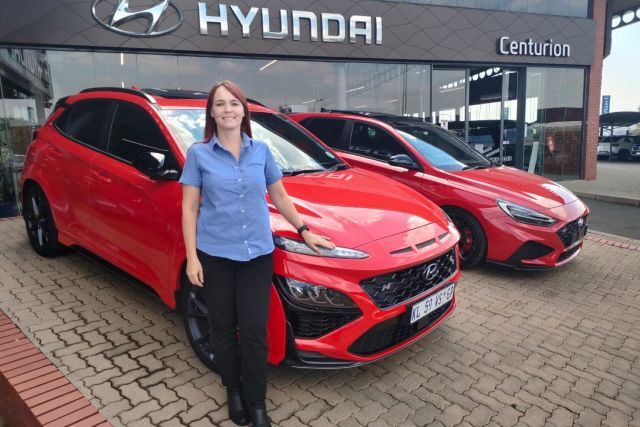