Chatting with the DP of the oldest private-owned BMW dealership

The oldest BMW dealership in South Africa under private ownership – that is one of many attributes proudly claimed by BMW Paarlberg in the Western Cape.

Situated at the foot of the Paarlberg mountain as its name suggests, BMW Paarlberg is an impressive-looking dealership in the old main road of Paarl under the management of owner and Dealer Principal, Karl Dahl.

“We have come a long way,” says the man who always had a clear vision of great things to come.

“I joined the original owner, Karl Redelinghuys, after working at BMW South Africa for eight years where I looked after national marketing and car distribution. My namesake established the dealership back in 1965, and I joined him in 1986.

“Karl retired in the late 80s, and I was offered the opportunity to buy him out. I’ve been here ever since.”

Before his BMW Paarlberg days, Dahl owned three Toyota dealerships in Ceres, Villiersdorp and Caledon, and now owns BMW Paarlberg and BMW Worcester. He also previously owned Land Rover dealerships when the brand was still part of the BMW franchise.

“Our next move is Mahindra, coming to Paarlberg (1st of October), but we have been running BMW Worcester and Mahindra Worcester for the last two years as well.”

Also in the mix is a Bosch workshop next to BMW Paarlberg, which Dahl acquired two years ago based on the “Right to Repair” approach expected soon.

BMW Paarlberg is what he calls “very much a family business”, although he has a non-executive partner, Dana Buys. “Dana is a very good mate of mine, but he is not actively involved.”

In contrast to his name, Karl Dahl is 100% South African, although his grandfather arrived from Scandinavia a few decades back.

He is married to Corlea, his wife for the last 12 years, and his daughter, Simonne, formerly an advocate after a short legal career, is now also part of BMW Paarlberg.

“Simonne at first looked after our human resources and did some marketing, but I was asked by BMW SA to move her into sales and later appoint her as General Sales Manager for BMW Paarlberg. Although it strengthens the ‘family business’ part, Simonne is very much on her own and is 100% responsible to me and our parent company for her portfolio – no shortcuts there!”

His other daughter, Natasha, is in the social media business, but is not directly involved.

What does a successful businessman like Karl Dahl do for fun? Not surprisingly, vehicles are at the core of his passion.

Dealerfloor was interviewing Dahl when he took an internal call and asked for his X5 to be filled and prepped for the coming weekend. “I love it. It’s an older model that has taken a few knocks, so we use it for weekend outings. Now that the national lockdown has been downgraded, we’re taking a trip to our holiday home at Gouritz River right at the mouth.”

Karl enjoys mountain biking “for fun”, although he has taken part in some races, but only for the fun and camaraderie. “And I play golf, for my sins.”

The Paarl businessman also loves fishing. “I like to go to the Seychelles for some deep-sea fishing, but I also fish from the shore at Gouritz.”

Another hobby that he hasn’t had much time for in many years, is flying a light aircraft. “I have a private pilot’s licence for a Cessna 210 and want to take to the skies again – soon!”

Not surprisingly, Karl also has a history of car racing. “I won a few local regional class championships back in the day in rallying. I rallied a BMW 327 Shadowline, which used to be the late Tony Viana’s circuit racing car, and I won the Western Province Class B Rally Championship in it.”

Back to business: “I love the interaction of our customers; I love to be with them. Thankfully, the lockdown is now downgraded, because I can’t do that from home. I love spending time at the dealership, but I also love being home or going on excursions – like this weekend,” he said as we walked outside past his BMW X5 being prepped for the weekend. 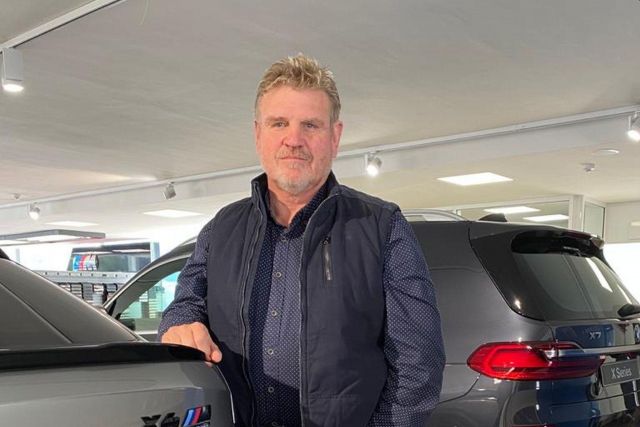