Surviving and growing in Aliwal North

It seems that all is not lost in the rural areas when it comes to business and service delivery. To a significant extent, the rural areas or ‘platteland’, took the brunt of the economic downturn and the last two years’ COVID-19-related problems.

But sometimes it is also the location of a small town and the larger agriculture sector in a wider region that sustain rural South-Africa. In Aliwal North on the border of the Eastern Cape and the Free State, signs are positive regarding business conditions.

Dealerfloor spoke to Eddie Marais, Dealer Principal at Aliwal Auto, the Ford dealership in the town. The dealership is owned by the Potgieter family for the last 25 years. One of their daughters, Noreen Potgieter Schoeman, is the Financial Manager at the dealership.

“We see positive developments in Aliwal North. A number of provincial state departments branched out to Aliwal, and the agricultural sector is doing well. We are also fortunate that we are becoming a hub for smaller communities in the region,” says Eddie.

“Accommodation is becoming scarcer, and the municipality did an incredibly decent job so far with the well-known hot springs holiday resort, a three year-project, which attracts tourist from all-over the country.

“The nearest bigger towns are located more or less in a 200 kilometre radius around such as Bloemfontein to the north, Queenstown in the south, Colesberg and Cradock to the east and west towards the border of Lesotho,” he tells Dealerfloor.

“Although stock shortages are a reality, we have learnt to live with and adapt our business strategy accordingly, we manage to sell everything we can get from Ford. Similar to a number of other towns, the Ranger bakkie is our star seller, together with the Everest.

“Sales of the Ranger and Everest make up around 60% of our business with the remaining 40% coming from EcoSport sales. In terms of the Ranger, it is especially the double and super cab variants that are most popular. There is a lot of excitement and enquiries about the new Ranger that’s on the horizon, and the Everest that will follow a bit later. Our used cars are also doing well,” says Eddie.

Eddie, who has been DP for the last 15 years, also acts as Sales and After Sales Manager. “I have always had a love for cars and started selling them part time when I was still working in the Human Resources Department at Correctional Services. I then joined the Ford team here in Aliwal and later became the DP.

“Yes, we work hard and if we have to switch on the lights in the evening to get the job done, we do so. From the break of dawn to sunset we do what needs to be done. Although we are not open on Saturdays, we do service vehicles by appointment that cannot make it during the week,” Eddie says. 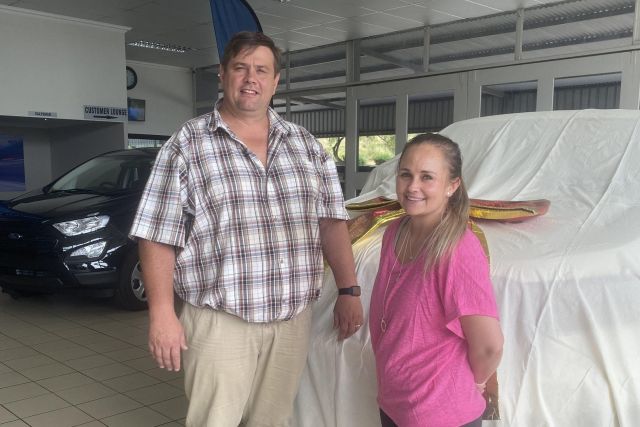